Our services this Shabbat, July 29th and 30th.

A thought-provoking and entertaining lecture by Dennis Davis 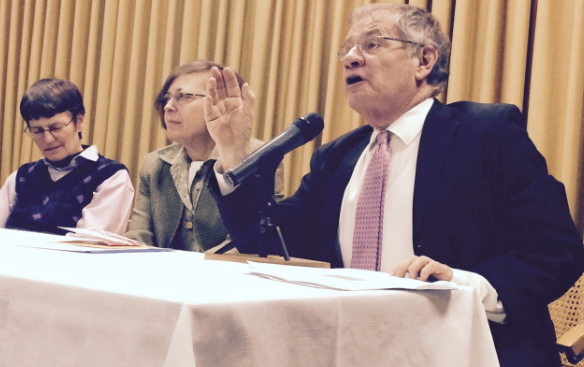 The 12th Annual Auerbach Memorial lecture by Judge Dennis Davis was an enormous success. The Slome was packed, with not a single vacant seat, and the audience were by turns entertained and provoked by an erudite and thoughtful lecture which drew on Talmudic sources to argue a case for a more inclusive and tolerant religious outlook. What was most remarkable was that the speaker is himself a practicing – and learned – Orthodox Jew, who outlined his argument within the confines of traditional Halacha.

The Auerbach lecture honours the memory of the late Franz Auerbach, educationist and outspoken Jewish voice against apartheid. Judge Davis quoted examples from Auerbach’s writings, as did Margaret Auerbach in her welcoming address.

Professor David Bilchitz delivered an appropriately thoughtful response. Our thanks to all those who made this such a successful evening.

Permanent link to this article: https://www.beitemanuel.co.za/2016/07/28/a-thought-provoking-and-entertaining-lecture-by-dennis-davis/