JKids Junior: This week, what is a Parasha?

Our services this Shabbat. Special service for Rabbi’s 40th birthday

Shavuot night: From cheesecake to Moses

Keep those fingers away until the judges are finished! 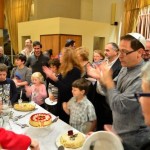 Congratulations to the cheesecake winners 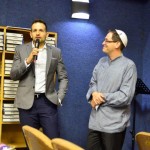 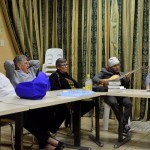 The brave, looking rather frazzled 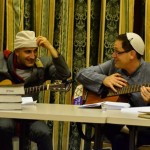 AMID shouts of “keep those fingers away”, and “don’t eat them yet”, Hester Hollander won a hard-fought victory in the Shavuot cheesecake competition, following earnest deliberation and much writing on clipboards by judges Harriet Davis and James Lomberg.

Runners-up were Sharon Shaked and Ilana Alroy, who had packed the table with their confections and took joint second and third places. One unlucky cake parted company with its plate and slid to the floor midway between kitchen and judging table, but proved delicious nonetheless. Bianca Shakinovsky got her kids to do the hard labour; Kathryn Peck submitted a green-hued anti-cheesecake, 100% vegan and made of avocado,

which won her joint third place. All the cakes were then devoured within minutes.

Brave few make it through the night on Shavuot

A SMALL but courageous group of Emanuelers are reported to have made it past  midnight on Shavuot last week, helped along by some discreet late-night tippling. There are photographs of their frazzled faces to confirm it. (Tradition, never quite achieved in Reform Judaism, is to study Torah until sunrise.)

The night began with a fascinating first session in which three Jews by Choice talked about why they made that demanding decision. In each case, it followed years of uncertainty. The first, James, said he first started identifying with Judaism as early as the age of five, kept returning to the idea during his teenage years to the cynical amusement of his peers, but only moved to convert in his twenties. Michelle, who passed her Beit Din a few months ago, met up with some Israelis during a difficult period in her life and visited Israel, where her first encounter with the Wailing Wall  “was like an electric shock”. Sandile only began with the Jews by Choice programme a few weeks ago, but has identified with Judaism much of his life, attending Orthodox services while in the USA. His Xhosa grandfather fought with the South African forces in Ethiopia in World War II and came home with a Falasha wife.

Asked why he had chosen Reform rather than Orthodox, James  told of an ugly encounter with an Orthodox rabbi who treated him as not quite human. He also said he would not be willing to join a movement that discriminates against gays. Panelists and members of the audience agreed that Africans who converted often felt self-conscious and uncomfortable, particularly among Orthodox Jews, and considered Beit Emanuel a more welcoming environment. Asked if they experienced a backlash from their families, all three panellists said their families had been most accommodating.

Later sessions included a discussion of the role of outsiders such as the Midianite priest Jethro in the Mount Sinai story; a discussion of a book that reflects upon the implications for us of the life of Anne Frank; and a guitar-jamming sing-along with Rabbi Shaked and Farryl Roth.

Permanent link to this article: https://www.beitemanuel.co.za/2015/05/29/shavuot-night-from-cheesecake-to-moses/